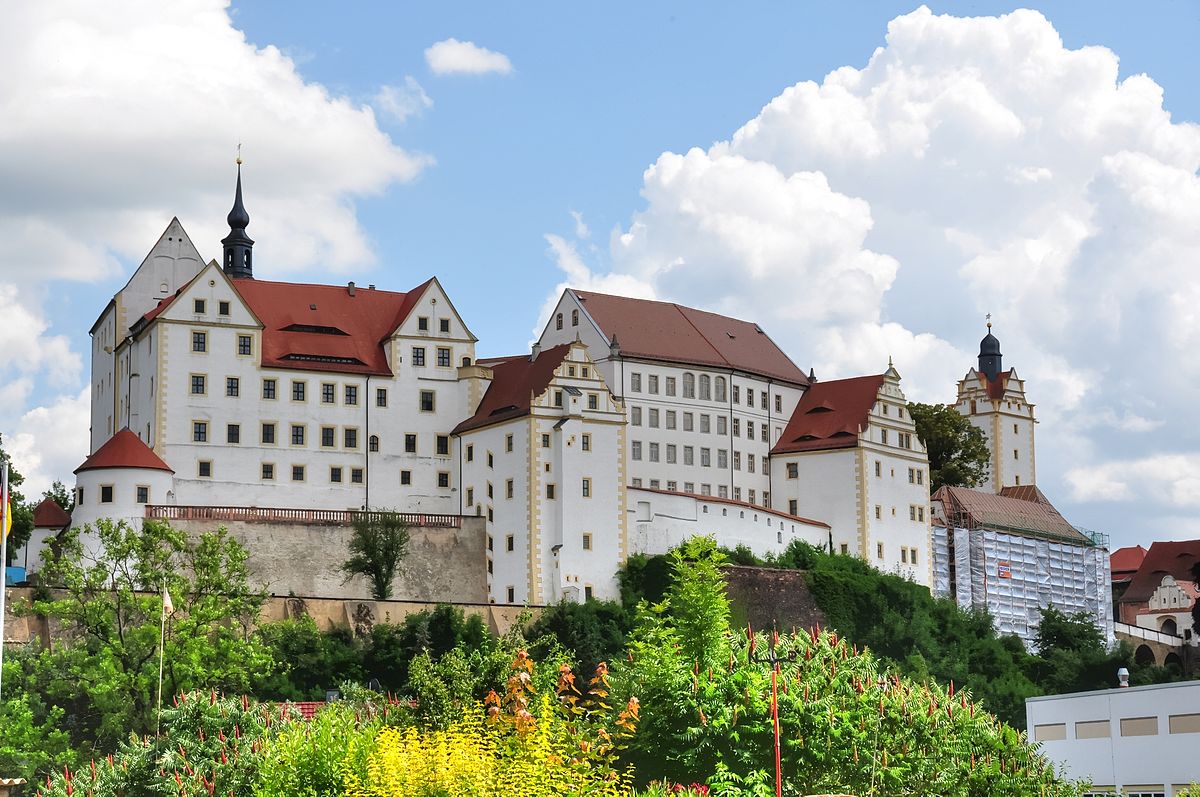 Why Colditz? As a child I vividly remember watching the BBC’s programme ‘Escape from Colditz’ on prime Sunday night TV.  I think I’ve still got the board game ‘Escape from Colditz’ in the loft at home somewhere, and I enjoyed playing the game with other members of the family, to see who would be the first person to escape from the castle.  The series was made ever-more intriguing for me when I found out it was filmed locally, in the grounds of Calver Mill in Derbyshire, with the mill being used as the backdrop for the castle.  The reason I know this is that the husband of the secretary of the primary school where my mother taught at the time was the local village ‘bobby’ at Calver, and his wife came into the staff room one day saying that last night Nazi troops had been seen marching around the village!

Getting there.   I flew to Berlin Schonefeld airport from East Midlands Airport using Ryanair, and then caught an ICE express train to Leipzig, stopping off en route from the airport to Sudkreuz railway station via the now disused Berlin Tempelhof airport, which I found by chance.  I luckily managed to sneak into the magnificent and huge art-deco and Stalinist-style booking hall and departure lounge, with its huge lines and pillars.

Forgotten but not lost. The village of Colditz is easily reached by service bus from the railway station at Leipzig with its huge cavernous iron and glass roof.  The bus takes you on a tour of a forgotten part of the world, where the train line to Colditz village has been closed, and everywhere around you there is a sense of isolation and decay. Having reached Colditz village some 2 hours later, the castle can be seen dominating the village on the top of a hill.  It is hard to think why this castle in a now forgotten part of Germany inspired many tales of bravery and adventure, with the very name ‘Colditz’ invoking a sense of fear and terror.

The village seems rather lost and forelorn, a common trait in the former East Germany as witnessed on my bus journey, as with the reunification of Germany in 1989 many people who lived in the east migrated to the west in search of better jobs and a better standard of living, leaving the elderly people behind.  There are a lot of derelict houses in the area, many of them large and grand, a legacy of a bygone era.  They have been left in this way probably due to the communists having a dislike of property ownership and wealth and so the properties were neglected and abandoned over the years.  With the dawn of the reunited Germany in the 1990’s, the level of decay and rot would have proved insurmountable to repair, so that these houses have been left to decay further.

Staying there. Part of the castle is now a Youth Hostel and refurbished to a high standard.  In Germany, Youth Hostels of the DJH (Deutsche Jugendherberge) receive funding from the state, perhaps mainly to accommodate large groups such as school parties and trips as cheaply as possible, all part of the children’s education.  I was lucky to have a dormitory to myself in the castle – for some £25 a bargain! And apart from a small school party, the hostel seemed rather empty.  The next day I took an organised tour of the castle, I was the only person who booked on this tour.  The tour covered most parts of the castle and took you out on to the ramparts so you could get a good view of the surrounding countryside.  Touring the castle this way, it didn’t seem impregnable as I thought.  The castle had a small museum which had pictures of successful (and unsuccessful) escapes from the castle, including a tunnel dug by the prisoners and also a home-made glider constructed out of home-made materials by the prisoners.

Getting out and about. I travelled back to Leipzig and then on to Altenburg, where I flew back to the UK.  Altenburg is an interesting place, its castle was the home of the Sax-Coburg Gotha dynasty, which Queen Victoria married into when she married Prince Albert.  The town reminded me somewhat of Britain in the late 1970’s ‘Winter of discontent’, with neglected pavements and rubbish piled in the streets.  Again, a far cry from the clean towns and cities in West Germany. Altenburg airport when I visited was the classic ‘Ryanair’ airport, a former NATO military base, comprising a large wooden bus shelter-like structure, with two large rooms – one for arrivals and one for departures.  This is one of the reasons why Ryanair manages to offer flights so cheap?