Looking for something different for a bit of Winter Sun this year, Ed and I decided to go to Mexico.  This is the first time I have travelled long haul for over 20 years or so but it was well worth the journey.

OK, so we binged on excursions – so good they got addictive! The tour guides are all brilliant and seamlessly bilingual. There’s a lot of information to take in and some of it is controversial. Much of the historical debate revolves around the extent to which the Mayans in the Yucatan used human sacrifice (very rarely according to the indigenous people). What is certain is that the Mayans were obsessed with three subjects: time, stars and the human body. The pictures below are just piles of stones until you know how to read them…

Tulum – Mayan ruins on the coast

Each pile of stones has been placed in alignment to the stars and sun to create special effects during the equinoxes, such as a shivering serpent shape in the shadows. 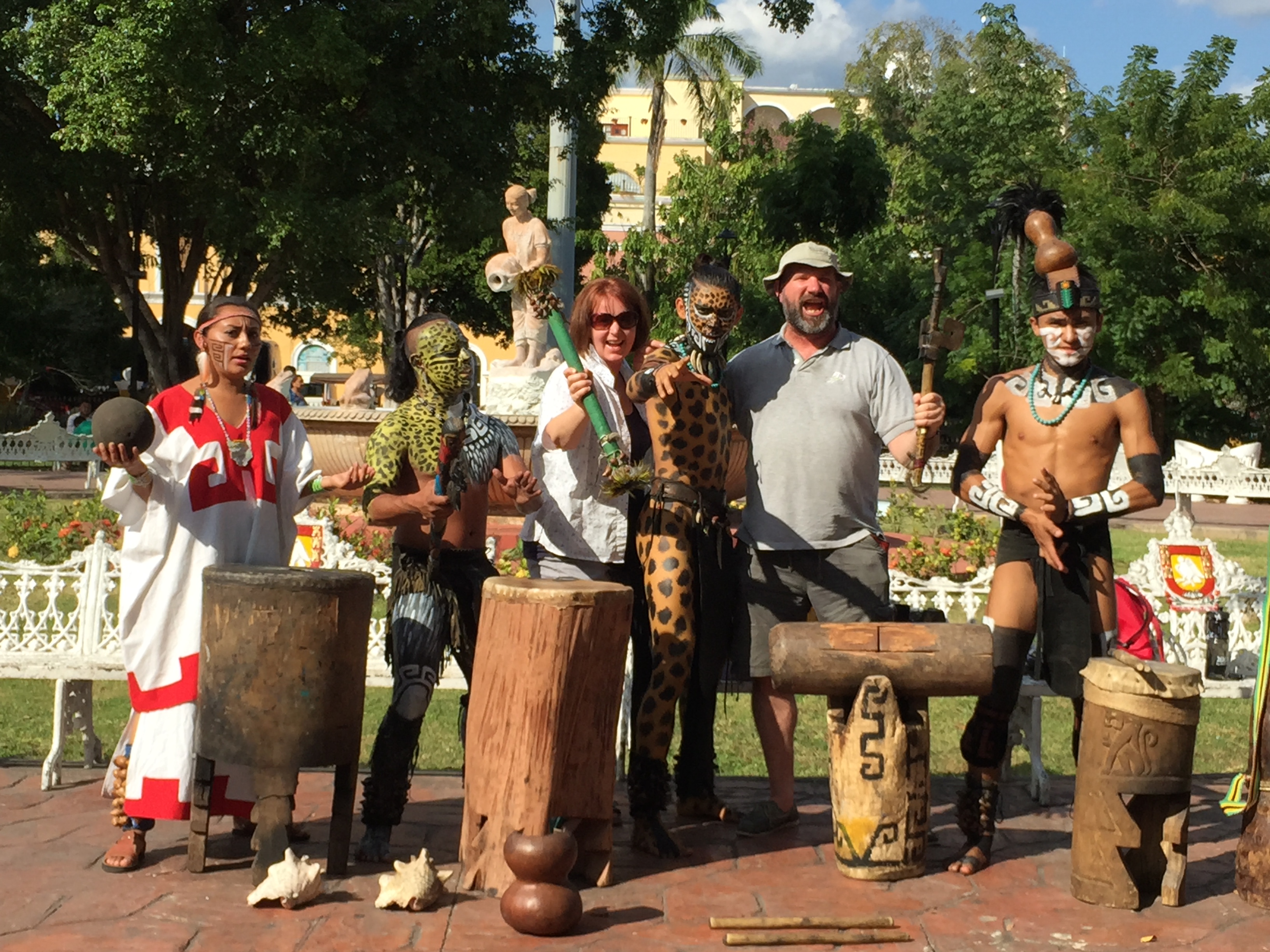 A couple of hours from Cancun, Valladolid is an inland city with streets laid out in an Hispanic colonial grid system.  Black-feathered musicians lurk around the fountain in the centre of town and they will spring to life for you in return for a donation of 200 pesos or a fistful of American Dollars.

Cenotes – cool caves and gorges for swimming and diving

The lush vegetation of the Yucatan Peninsula grows on thin topsoil which rests on a huge limestone shelf.  Cenotes are sinkholes caused by the limestone being dissolved by the ground-water, forming beautiful cavernous natural lidos.

Cancun has a Hotel Zone which stretches an incredible 28 km along a sand spit which provides a beach on one side and a lagoon for wildlife, including crocodiles, on the other.  You can work out where you are from the little Mayan road-markers.  We stayed at km 11 in one of the original hotels which was surprisingly modest and tasteful.  Once we got used to jumping on the local red buses – the R1 and R2 – there was no stopping us from sorting out our own trips.

Km 4 For Isla Mujeres – the terminal is near Playa Tortuga,

You can also go to Cancun for Market 21 or 28 – RUBBISH tacky emporiums and not worth it!

We loved Isla Mujeres because it had a relaxed and colourful vibe.

Mexico is a treat for the senses and easy-going tourist territory. Since I’ve got back a lot of people have asked me if I felt safe. The answer is – yes – absolutely! But, then again, I guess we did stick to tourist areas.

The sun is extremely powerful and temperatures can feel higher than they actually are when it is humid. On the beach there’s a light onshore wind which makes it pretty much perfect (we went end of Jan/ early Feb).

Although the stereotypical image of Cancun features American holiday-makers, we stayed in a hotel which catered mostly for the domestic Mexican market. We also chose not to go all-inclusive so we could eat at different cafes and street food canteens.

We chose to use Mexican currency rather than USD $ and your money goes a lot further this way. Most places seem to accept both currencies but all of the prices are cheaper in Mexican!

Our favourite breakfast spot was in the backpackers’ zone. They specialised in fresh fruit smoothies and all-day Mexican breakfasts. The menu was – helpfully – in English but one of the great things about this country is the clarity and simplicity of the Spanish they use. Having spent years learning Spanish through books, tapes and language labs, I never really got to use it in Barcelona or Bilbao surrounded as I was by Catalan or Basque speakers! Mexican Spanish is muy facil!