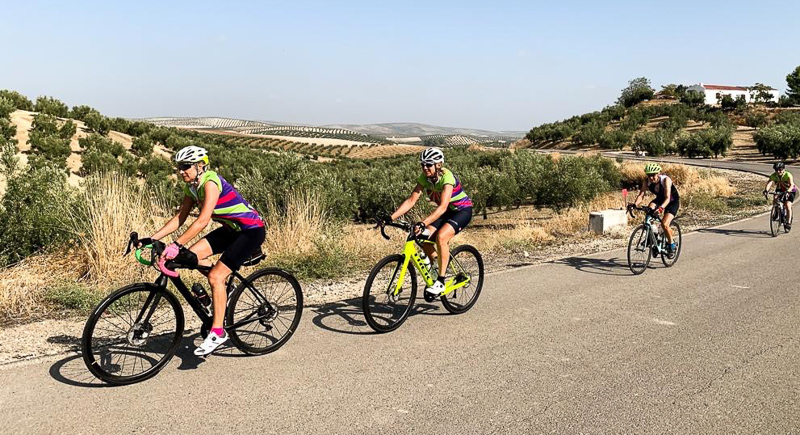 This is a story which spans half a decade.  Thankfully, there’s a happy finale! Many thanks to Marian French for sharing this story with Slow-Cycle. If you are reading this and think that you have a story to share, please contact ruthmcintosh9@gmail.com and visit my business blog at goodapplecopy.com

In April 2014, a friend of mine approached me and said, “we’re thinking about doing the St Malo-Nice in September 2015, from the north to the south of France”.  I jumped at that.  We had 15 months to prepare and a chance to improve my long distance cycling with some professional coaching.  Great!  I paid my deposit.

That summer I went on a family holiday and we went mountain biking.  Unfortunately, crossing a small bridge, I came off the bike and I didn’t get up. Lying on my back,  I could pull my knees up but I didn’t know how much damage I’d done.  Later, in Grenoble hospital, I discovered that one vertebra had completely crumbled. My spinal cord had been compressed and compromised.

There was no point at which I thought I wouldn’t walk again, although with hindsight, I think it was a close thing.

With rods and pins, French surgeons put me back together again.   Bones fix more easily than nerves so I’m left with constant pins and needles in my feet and long lasting weakness in my calf muscles.

There was a long six month rehabilitation to get back to even starting to prepare for France. In March 2015, I signed up for coaching to get fit and ready for September and our epic trip.

We set off as a group to do the St Malo to Nice tour and I got to the end of the sixth day. I think I was tired…  We were going along an old railway track.  There were some bollards across the road.  There was a stream of us dotted along the path. I was behind another cyclist.  Someone in front shouted, “bollard!”.  I shouted, “bollard!”.  The cyclist in front of me managed to catch her handlebar on the bollard. It flipped the rear wheel of her bike around and blocked the gap between two bollards that I was headed for.  I was quite close behind her.  I had nowhere to go except over her back wheel, so my bike flipped over. I hit the ground with my elbow. Ever the optimist, I was hoping that it was only dislocated.  Hopefully, I’d be in and out of the French healthcare system really quickly and able to continue the next day.  With a broken elbow, however, it wasn’t to be.

The tour had to go on, I was on my own.  My brother and sister in law lived relatively close, so a couple of days later, with the elbow pinned and secured, they came along and scooped me up.  I stayed for a few days more and then flew down to meet the others in Nice. It was so disappointing, I hadn’t completed the whole thing. Someone told me that the challenge had not been to complete the journey but to get to the start line. But it felt like unfinished business.

I wasn’t going to be beaten and in 2019 signed up to do a trip across Spain.  Cycling an average of 70 miles every day for 14 days is a big deal, it can become exhausting.  I don’t think my preparation was as good this time around. I didn’t have the accountability you get when you have a coach watching over you like a hawk!  I was doing between 8-10 hours of cycling a week and some Cross-Fit classes and I had become stronger than in 2015.  It wasn’t about the quantity but the quality of training, making every session count.

I was very excited about Spain because the route went down the middle of the country. We would be visiting parts of Spain where the tourists don’t normally go. Seeing white-washed villages and local cafes with wizened old men outside smoking and playing card games. Yes! My kind of trip.

We flew to Bilbao and picked up a transfer bus to spend two nights in San Sebastian. There we met up with the rest of the Saddle Skedaddle group.  It was great to stay there for a while, eating pinchos and drinking wine.  The group consisted of eleven participants plus three guides.  The guides were from Spain, Italy and France so very international.  One guide drove the support van whilst one guide led and one swept up at the back.

Every day, we set out together but it never took long before the group would spread out of sight along the road.  If you were in the middle and took a wrong turn, no one would know for a while!  We had the route on our Garmins and for the most part I rode with at least one other person.  For me, riding is a social activity; the group I’ve been doing these tours with have got amazing empathy and ability to sense how you’re feeling.  If you’re feeling a bit low or lacking in energy, they’ll start singing, usually something from The Sound of Music.  The hills are alive! We do pretty good rendition of Bohemian Rhapsody too!  No technology required!

We don’t carry anything on the bike, only what we’ll need for the stage.  It’s easy cycle touring!  Everything goes on the van.  You meet the van and the rest of the group at coffee time and at lunch time.  If it’s a long day you’ll get an afternoon snack, there’s always an opportunity to get more food.

Spain’s Got a Plain, Right?

Setting out from San Sebastian, you hit the hills straight away. I knew that the average altitude in Spain is a thousand feet.  I imagined you’d go up from the coast onto a plateau which was flat all the way until you get to the other side. But, of course, it’s not like that at all. There are a few sierras to get over! (pic) On a bike, the Spanish hills never felt too bad. The roads are well maintained and have been built to snake up the sides of the hills, creating steady climbs rather than muscle breaking and soul destroying efforts.

Getting in to the Touring Routine

In the north we cycled through vineyards in the Rioja region. Towards the south you go through olive groves then finally, in Andalusia, you are in the cork forests. Evening meals generally came with a glass of wine. Normal routine after a cycling day would be to finish with a protein recovery drink but would sometimes turn in to, “let’s have a gin and tonic or a beer!”. Being on the road, you get in to a routine. You come in; have your recovery drink; clean your bike; stretch; clean yourself; clean your clothes and put your electrical devices on charge. You phone home to let them know that you’re safe and only then do you get to go out for dinner. I love being in that kind of routine, as long as the time isn’t too tight.

“When you are in that rhythm, you feel totally away from the normal stresses of life because there just isn’t time to worry about anything else. Whilst you’re cycling, you’ve got all those hours to be chatting, singing, looking around you as well as some great thinking time”

The last part of the day, we usually made sure that we were together, doing a peloton, singing songs and finishing strongly. As we were normally the slower ones of the group, we’d have one of the guides with us too. As the two weeks went on, a couple of the guys who started off the mornings in the faster group would drop back.  We got quite a reputation for sweeping up the stragglers and carrying the group to the finish.

The last day started off as a stunning ride. Low clouds swept along a ridge but as they thinned, wide vistas across the mountains became visible.  Just enough time to reflect on the journey and enjoy some quiet roads. We were then on to a long section of main road down to the coast which was quite hairy with traffic.  It was only five minutes through the town of Tarifa to finish next to the beach.  It was just a relief… “I’m here!  I’ve managed to get through this one without any calamities”.  There were a few tears of joy and then the champagne came out!  Well, it wasn’t champagne, it was cava, we were in Spain after all!  FINALLY…I HAD DONE IT!